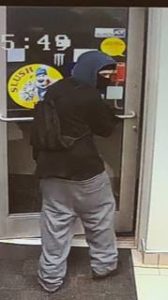 On Monday, May 14th, 2018, at approximately 4:40 am, Police responded to a call for an armed robbery at the Shell Gas Station, located at 1154 Division Street in Cobourg.  It was reported that two males entered the store and demanded cash and cigarettes.  Both suspects were armed with handguns.

The suspects obtained an unknown amount of cash and cigarettes and fled on foot eastbound on Densmore Road.

Cobourg Police are asking for the assistance of the public to identify the two suspects.

Male white, 16-25 years, wearing black pants, black or dark grey jacket, grey hoodie underneath, black sunglasses and wearing what appears to be a blue cover over his mouth area.